It has been eleven years since Brandon Santini made the permanent move to Memphis to further his career. The singer and harp player has toured constantly, honing his talents and putting together a band that is as sharp as the crease on Rick Estrin’s pants. The move has paid off in recent years with several Blues Blast and Blues Music award nominations, giving Santini a much higher level of visibility throughout the blues community.

Last summer the band headed north for an engagement at the le Petit Imperial, a concert venue in Quebec City.  It is obvious from the start that the band is loaded for bear. Nick Hern on bass and Chad Wirl on drums lay down a mean shuffle on “One More Mile” while guitarist Timo Arthur lays down some tantalizing rhythmic phrases. The leader unleashes his deep, expressive voice before attempting to blow out the reed in his harp with two edgy solos. Santini co-wrote “This Time Another Year” with Charlie Musselwhite, which means there is plenty of dirty harp before they break things down to give Arthur an opportunity for some delicate guitar interplay.

Santini is right at home on a laidback take of “Elevate Me Mama” until his wailing harp kicks things into another gear. “Evil Woman” keeps things down in the alley and Arthur finally gets to run through his arsenal of guitar chops.  He sets the pace as the band races through “Have A Good Time” before finishing off the first part of the program with a swinging rendition of “Help Me With The Blues”.

The second set is more of the same as Santini hits the stage blowing with gale-force intensity on the classic “Got Love If You Want It,” which glides into “No Matter What I Do,” another romping shuffle complete with a vocal dripping with soul. “What You Doing To Me” provides a needed respite as the band slips into a country blues groove, the ideal setting for one of Santini’s best vocal performances.

“My Backscratcher” features more of the leader’s fat harp tone and another blistering solo from Arthur.  The frantic pace of “I Wanna Boogie With You” undoubtedly got the audience out of their seats, especially when Santini summons up the intensity of one of his harp mentors, James Cotton.  Most performers would have stopped on that high note. But Santini and his cohorts tear through one final number, “Come On Everybody,” just to make sure that their fans got their money’s worth of high-octane blues.

Throughout this masterful performance, Brandon Santini displays the sheer artistic command of an artist in complete control. His thick-as-molasses vocals and muscular harp playing combined with a band that backs his every move make this package a real gem that stands solidly in the blues tradition. Recordings like this are hard to come by, so make sure you don’t miss out on a disc that is sure to lead to a few more award nominations for Mr. Santini.

END_OF_DOCUMENT_TOKEN_TO_BE_REPLACED

What on earth could possess a 15 year old boy in 1997 to have an interest in Blues harmonica?

A young Brandon Santini listened to a popular rock band of the day and liked what he heard.

“At 15, as you can imagine, you listen to what’s on mainstream radio and Blues Traveler…I heard those guys and I was like, ‘Man, I really like that harmonica.’ So, I bought one of their albums and I saw what kind of harmonica John Popper plays, so I asked my mom to take me to the music store and ended up buying a harmonica that day.”… READ THE FULL INTERVIEW HERE 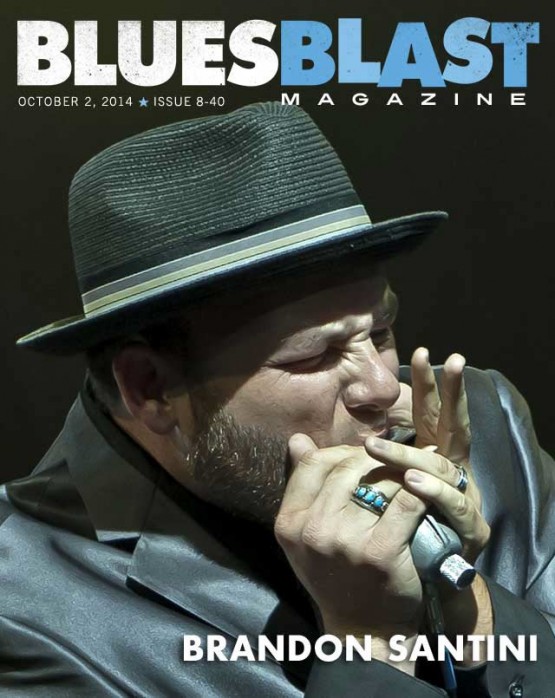 END_OF_DOCUMENT_TOKEN_TO_BE_REPLACED

There Are Many Different Opinions As To What The Future Of The Blues Harmonica Will Be.

Memphis vocalist and harmonica player Brandon Santini is undeniably a worthy player to keep an eye on as the latest surge of young blues artists leave their footprint in blues history. His name is worthy of conversations that include Jason Ricci, Billy Gibson, Dennis Gruenling, Rick Estrin and other frontline harmonica players by combining his love and respect for traditional blues with a present, colorful style of playing that is often compared to James Cotton or Paul Butterfield. Raised in the Piedmont region of North Carolina, Brandon purchased his first harmonica in 1997 at the age of fifteen when his mother took him to the local music store upon his request. He founded the Blues Music Award nominated band Delta Highway in 2003 and relocated to Memphis where he absorbed the sounds and culture of the Delta and North Mississippi Hill Country, honing his craft night after night, sweating it out in local Beale Street clubs just like Robert Johnson, Muddy Waters, and B.B. King did decades before him . . . Read the interview HERE ->

END_OF_DOCUMENT_TOKEN_TO_BE_REPLACED

This Time Another Year

Brandon Santini was born in the Piedmont region of North Carolina, but relocated to Memphis in 2003, after forming his band, Delta Highway.  They represented Memphis in the 2006 IBC’s, and were nominated for a BMA in 2009.

The young harpblaster is back with hs second album, “This Time Another Year,” on the Swing Suit label.  Ten originals and two covers show the depth of Brandon’s talents on both chromatic and diatonic harps.  And, his backing crew is a set of genuine blues all-stars, too.  Jeff Jensen is on guitar, Bill Ruffino is on bass, James Cunningham is on drums, and Chris Stephenson is on B-3.  The mighty Victor Wainwright holds down the 88′s, and guests on a couple of cuts.

The title cut is a booming blast of harp-driven blues, playing out as Brandon’s biography of sorts, and is a killer collabo co-written by Brandon and Charlie Musselwhite.  A wishy-washy lover is the subject of “Things You Puttin’ Down,” featuring fine organ from Chris.

Brandon has a fine appreciation for the country-blues in the vein of Rice Miller.  Check out the sweet swing of “Bye Bye Bird,” “Been So Blue,’ and the set-closing acoustic band original, “Fish Is Bitin.”

We had two favorites, too.  Another shufflin’ boogie dealing with a high-maintenance girlfriend is the raucous, slide-driven “Coin Operated Woman.”  and, Victor Wainwright adds piano and duet vocals to the swaying, walkin’-blues lope of “What You Doing To Me,” detailing a trip to New Orleans via Highway 61 to “lay down our heavy load.”

It is easy to see why this has been nominated for a Blues Award, given the immense talents of Brandon Santini and the other cast of players, and the overall strength of the material .  He’s come a long way from his days of busking down on Beale, and here’s wishing him the best of luck come next May!!  Until next time…Sheryl and Don Crow, Nashville Blues Society.

END_OF_DOCUMENT_TOKEN_TO_BE_REPLACED

There are many different opinions as to what the future of blues harmonica will be. Memphis based Brandon Santini is undeniably a worthy player to keep an eye on as the next decade unfolds. His name is worthy of conversations that involve Jason Ricci, Billy Gibson, Dennis Gruenling, Rick Estrin and other frontline harmonica players that have become part of a new wave in the blues world.

With tasteful speed and licks, he combines his respect to traditional blues with a present colorful style of playing. Raised in North Carolina, Brandon relocated to Memphis in 2003 where he began to absorb the sounds and culture of the Delta, honing his craft night after night, sweating it out in local Beale Street clubs just like Robert Johnson, Muddy Waters, and B.B. King. He fronted the Blues Music Award nominated band Delta Highway for six years and is now embarking on a solo career. Brandon’s second album “This Time Another Year” released on March.

END_OF_DOCUMENT_TOKEN_TO_BE_REPLACED

Brandon Santini
This Time Another Year

Produced by Santini along with his guitarist, Jeff Jensen, the album sounds like the pulse of Memphis music itself. Got Good Lovin’ is a Saturday night blowout waiting to happen, with Santini’s Dr. John-meets-Delbert McClinton vocals mustering a little suggestive deviance along with the soul. On What You Doing To Me, one of a few cuts co-written with friend and piano contributor Victor Wainwright, you can feel the urgency of Santini’s longing to break free (“gonna go down yonder, travel down that road”), set to a lazy Delta backbeat.

Dig Me A Grave is a highlight, ripe for an emotional meltdown when performed live- the track’s sense of dejection is heightened by a stunning solo from guitarist Jensen. Fish Is Bitin’ wraps up things with a lighthearted rural country charm.

A likely successor to Rod Piazza, with a uniquely Memphis-by-way-of-New Orleans bump, Santini has got a swagger that should carry him well beyond the borders of Beale Street.

END_OF_DOCUMENT_TOKEN_TO_BE_REPLACED

This Time Another Year Is A Brandon Santini Showcase

There are a lot of good harp players out there in the blues world right now, and it is really hard to stand above the crowd. Up and comer Brandon Santini is that player. He started playing harp at 15, and later moved to Memphis from North Carolina to learn and integrate different sounds and styles into his playing. He has made his bones playing the clubs on Beale Street, as did many masters before him.

This Time Another Year is a Brandon Santini showcase, simmering in places, and smoking in others. The album is mixed very well, and lets the music speak in a spirited voice. Production values are good as well, so nothing gets in the way of the music. Friends, this is some fine music too. The players on this album really impress: they are Brandon Santini – harmonica and vocals, Jeff Jensen – guitars and vocals, Bill Ruffino – bass, James Cunningham – drums, Victor Wainwright – piano, and Chris Stephenson on the organ.

This is a killer album! There are several standout cuts here. The fast moving opener “Got Good Lovin’” cooks with a rocking harp solo from Santini, and nice picking from Jenson on guitar. “This Time Another Year” is very restrained as Santini and company keep a tight lid on and let things build towards release. When release arrives, Santini unleashes some gritty, hardcore harp lines that are articulate and immaculate. Santini’s control and technique is admirable. “Late In The Evening” features some insanely good harp playing from Santini, and some fine string caresses from Jensen, complimented by the always stellar piano stylings of Victor Wainwright, who is just inspired and flawless here. “Things You Putting Down” is a sweet and slow Memphis soul outing that has Santini in fine form on vocals and harp, and again features a simple but righteous solo from Jensen on guitar.

The band’s playing is exceptional throughout the album, and they never fail to impress and draw the listener in. At 53 minutes, there is plenty of blues satisfaction in this package. Sit down, grab some BBQ, relax, and let Santini and company take you away.